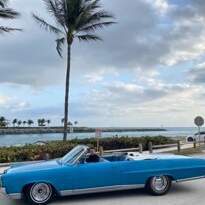 Before pictures of the donor transmission. Notice identification tag location on mine. It should say p64 on tag.

My son and I had to take a trip from FL to CA for a surgery. We needed to stay for 2 weeks leaving us with some time on our hands. We came across this 1964 pontiac Bonneville on Facebook marketplace.