GREETINGS FROM THE NORTH 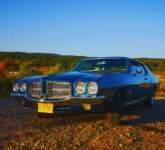 By CLEARCROW,
September 7, 2021 in Introduce Yourself